Skip to content
A series of co-creation labs investigating mankind’s eternal quest for energy. The labs provide a multilayered narrative in a table landscape with participants preparing solar cells with digestible resources.

The temporary PhotoElectric Digestopians are tested and tasted on heliotropic tongues, silenced when the sunlight becomes electrical energy. The efficiencies of the transformative vehicles are less than the O,1% of Alexandre Edmond Becquerel’s photoelectric cells in 1839. 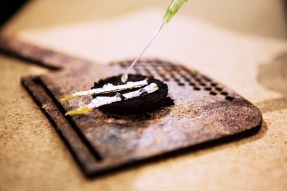 The first digestopian was made at TakuLab (Bru) on October 21st 2010. The lab form came to be at the Tactile Research Lab of the artscience interfaculty of The Royal Academy of Fine Arts, The Hague) on Nov. 8, 2010

The Digestopians Labs are a node of “PhoEf: The Undisclosed Poésis of the Photovoltaic Effect.“: ongoing artistic research since 2007

Other strands of the Digestopians work: ongoing work inspired and fused by the Aronia Melanocarpa berry: most eloquent active agent of the Digestopians, that pulled Bartaku to a former Aronia plantation / Kolchoze at the edge of a shrinking town not so remote from the Baltic Sea. See > 1HAMP

This tangent led to another one in which the narratives and materialities of both the Aronia berry and Flax/Linen, both examples of historic resilient entities, were combined in a case study as part of the Resilients project (2011-2013).  The collabaration with Carole Collet students and colleagues of Future Textiles Deptmnt. of Central St. Martins College of Arts and Design !University of the Arts, London) led to various outcomes. More